Training and Placement Cell under the supervision of Dean Placements, Prof Manav Aggarwal held a 1-day workshop on Resume Writing, Mock Interviews and Group Discussions on 14th Oct. 2019.
The Event was inaugurated by Principal Dr. S.K. Arora, Prof Manav Aggarwal (Dean Placements), Dr. Nischay Bahl ( Dean Research ), Prof Manish Arora, Prof Bhuvan Lamba and Prof Naina.
Principal Dr. S.K. Arora praised the initiative saying that earlier the students were not aware of the placement but now the scenario has fully changed.
The spotlight person of the day was Mr. Rajvir Singh Chohan along with Mr. Aditya and Mr. Prabhjot. All the dignitaries were welcomed with a bouquet and momento.
Mr. Rajvir Singh Chohan has a total work experience of 20 years. He has helped thousands of students not only in Personality test and Aptitude Preparation but also to secure admission into top business schools in India.
The workshop started with various quotes told by eminent speaker. He made the students aware by telling them the books and newspapers which they should read to increase their knowledge and vocabulary.
Next session was on Group Discussion where the students were made aware about the basics of group discussion, the do’s and don’ts of group discussion along with live G.D. sessions.
Speaker Rajvir Singh Chohan explained G.D. in most comprehensive manner telling that SPELT APPROACH (Social, political, Economic, legal and Technical) is to be applied in every G.D.
He explained that a single person in G.D. has to play the role of a teacher, a salesman, a gatekeeper, a butcher and a time keeper. The students were given various topics on which they were to perform live Group Discussions such as-
1. Are educated females a matrimonial mismatch?
2. Indian cricketers should not endorse brands.
3. Coke and Pepsi should be driven out of India.
4. Food comes first, ethics later.
5. Indian economy
After that, the students were made aware about the importance of Resume. Students got the tips of how to draft a resume in the best way.
The next session started with the concept of interviews where the students were told about interview ethics and etiquettes. Speaker Rajvir Singh Chohan made the students aware about the anticipated questions asked in an interview.
The queries of the students were taken over by the speaker Rajvir Singh. The students relished the overall proceedings.
Esteemed Principal Dr. S.K. Arora congratulated the Training and Placement Cell on the successful completion of the workshop saying that the students are the real assets and their growth is utmost priority for the college.
He said that contrary to other degree colleges, DAV College Jalandhar is committed to provide best of training and will provide for the most opportunities for placement.
Dean Training and Placement, Prof Manav Aggarwal thanked the administration, students and other dignitaries saying that it is the collective Win-Win situation for the organisation and Training and Placement cell is totally committed for its students but now it is the turn of the students to grab the opportunity.
Then, the winners of various sessions at the end were announced which were as follows:
1. Bakshish Kaur- B. Com (III)
2. Rachita- B. Com (III)
3. Harnoor kaur- B.Sc. Computer science (III)
4. Shipra- M. Com (II) 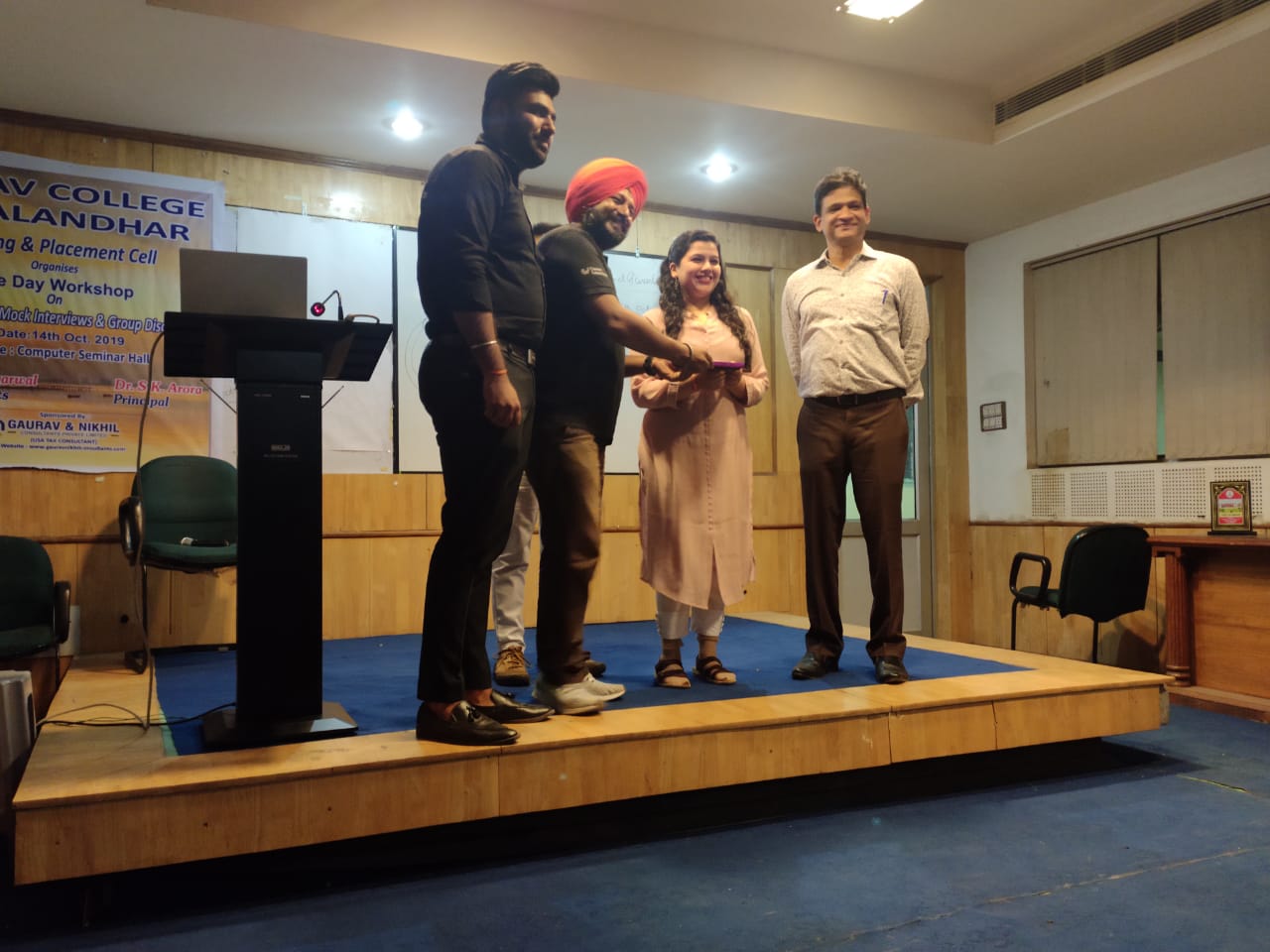 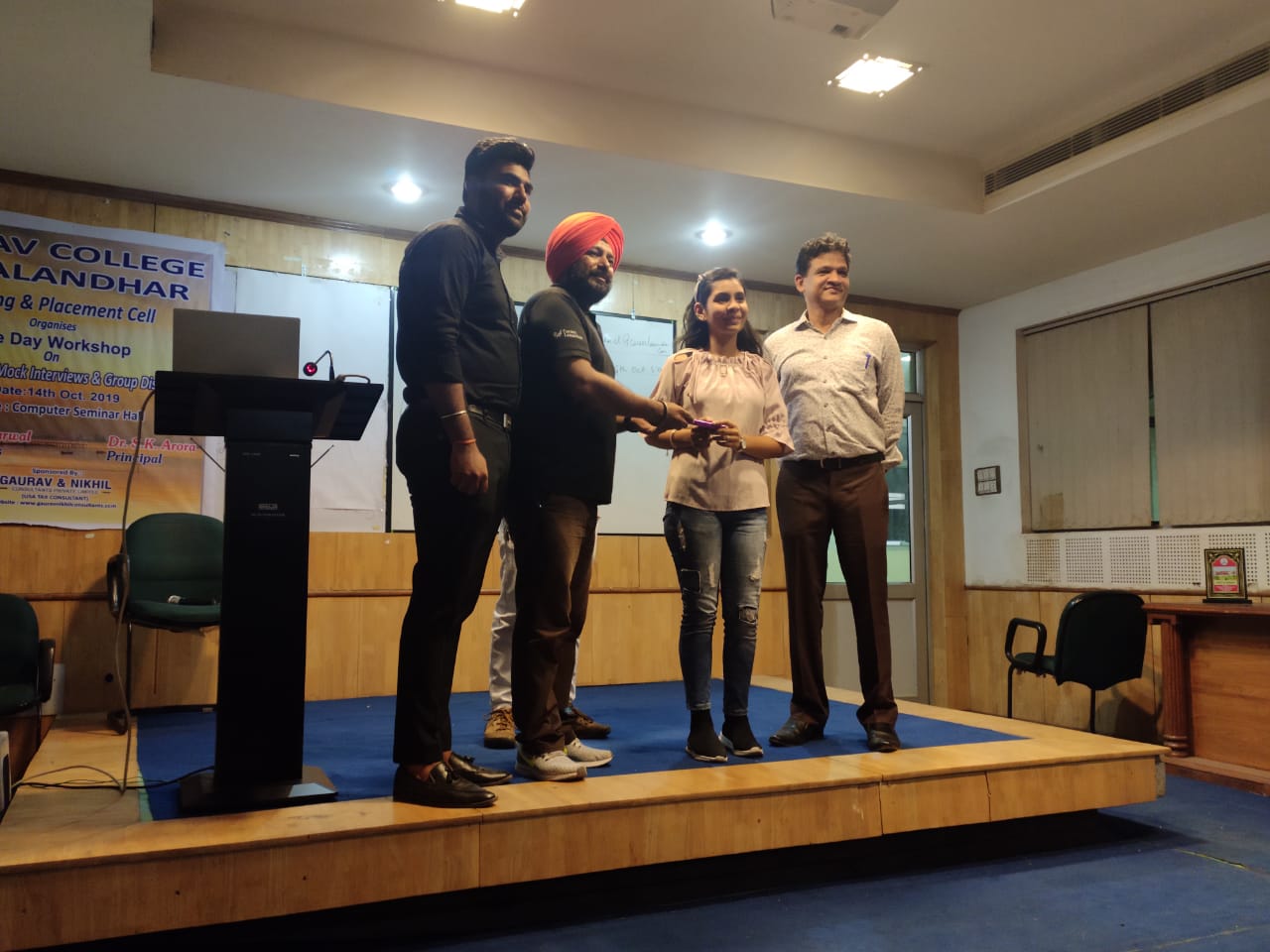