Today (13th May) DAV College Jalandhar at the glorious occasion of entering into the 99th year of its commendable work in the field of education , is being congratulated from all the well-wishers.

“DAV College since its foundation has been considered one of the most important outstanding educational institutions, the college’s strong commitment to excellence in research and teaching has been upheld. DAV College has managed to become an important role model of the country”

– Principal Dr. B B Sharma

“On the institution’s 99 years sojourn, everyone who has cooperated in the entire period, provided that anyone has devoted their unique contribution, those individuals possess extreme gratitude from core of our hearts”

– Principal Dr. B B Sharma

“DAV College a unique combination of simplicity, where the students with the help of modern methods, are nurtured with value-based education are individual modernity. Our main goal is the full development of individual personality holistic approach.”

-Principal Dr. B B Sharma

DAV College foundation in Jalandhar traces back to May 13, 1918 in memory of the edifying approach of Maharshi Dayanand Saraswati Ji under the preeminence of Principal that time, Pandit Meher Chand, Pandit Lakhpat Rai, Lala Radha Ram. Since then, DAV Colllege Jalandhar College has been successful in providing a responsible citizen to the nation. Here children are not only taught, but are also infused with moral values. During the construction of the college, Principal Mehar Chand himself selected bricks used for building a further legacy.

DAV College throughout the 98 years of its existence in field of education, entered in the 99th year. The entire nation is proud of the DAV College Jalandhar instituted in the education sector before partition has been throughout the way from last 98 years. In these golden years, not just in Academics but also in sports and outdoor activities, college has maintained their position at the top. A total of 22 academic departments in various disciplines exist.

Degree of M.A made debut in 1918 in college where Mr. A.K. Mayer was the first student at the college. In the 25th year of its establishment, the college began to subject Geography, in its 50th year, the college launched the English MA and lastly they added MBA degree in 75th year. DAV at present is instrumenting 14 post-graduate, 3 post-graduate Diploma, 12 undergraduate courses in which 22 various academic departments are there.

Millions distinguished Indians feel proud that they had been a part of this Temple of Knowledge.

The essential part of the college’s history is the time of partition as at that time DAV Institute conserved the education. Refugees stayed in the college premises, the revenue department was in college hostel. DAV College at that time helped in providing educational stability in Northern India. And today the college is one of the best institutions in the north.

When it comes to the vision of College, it is to provide the best citizen to the country who using education as weapon will be able to bring changes in the country and those persons will be full of moral values.

The mission of the college is to bring revolution in education, research, business and other key sectors to improve quality education in the rest of the country so that the country could run longer on path of development and a progressive society is the main objective of DAV College, Jalandhar.

Principal Mr. Suraj Bhan whom the students still love, still remember advanced as the Vice Chancellor of Kurukshetra University and Panjab University and eventually also became chairman of the DAV management committee. The longest term of 15 years was of Principal Behl. He is well known for their discipline, his love for the students who maintained academic standards, excellence in sports and cultural activities and who also scored top order. Under the preeminence of College principal Dr. Satish Sharma, college soared to new heights. Principal Satish introduced co-education in the undergraduate program, which led to a huge increase in the number of students entering college.

DAV College holds its place in the country’s leading educational institutions, UGC’s NAAC this year bestowed the College ‘A’ grade (CGPA 3.76 / 4), which is the highest among fellow co-education Colleges in India, or in short to say, DAV is the best.

Recently sobriquet as Best Principal, DAV present day Principal, Dr. B B Sharma said, we almost are about to enter in the festive year of college (centennial) , I hope my students will always look forward for bringing laurels to this institution. I received immense love and affection from the staff and students. Dedicated and committed staff, hard-working and intelligent students made DAV stood top rank.

Principal Sharma said,” During the centennial celebration, Vedic Arya Conference will be proposed, along with the introduction of new courses and Outsourcing. College will create on their website a page for Old Davians Association (ODA) for old aluminates with a link to join the alumni and economic cooperation. The College hopes that within country and abroad, thousands of college alumni will engage again. On this occasion, with the help of alumni, special scholarships and addition of new features to the college are to be proposed. High Quality Research Labs, research activities, training of teachers and students are also part of this grandeur scheme.

Principal Sharma greeted on Foundation Day of the college greetings to all and said that we salute all those people who devoted their whole lives to this college, we are proud that we attached to this temple of learning which gave us the opportunity to serve. Principal Sharma cited 2016 “year of achievement,” for the college. Earlier this year, DAV College Jalandhar was bestowed “Potential for Excellence” Award by the UGC and our college is the country’s best Co – Educational College.

Principal Dr. BB Sharma voiced, “DAV College a unique combination of simplicity, where the students with the help of modern methods, are nurtured with value-based education are individual modernity. Our main goal is the full development of individual personality holistic approach.” Our college has been on full development and excellent work throughout the classroom culture that exists here. A person needs just perseverance. If we sit around and bunk class, we may get a degree but we will not be developed. DAV College has excellent faculty who are always present in the college for their services, and who do not serve children the book knowledge but also passes them the value of life. As the principal of this college i feel greatly honored and I wish that my college remain immortal.

DAV College is a leading college of the Guru Nanak Dev University. College administration and faculty together works for the overall development of the students. Our academic perseverance, sports, cultural activities, social awareness and moral responsibility to encourage has been a strong tradition. The college aims to refine our infrastructure and environment. The road of progress is being marched every day.

DAV College in North India is the first Boys’ College. In 1948 it became the first college which acquainted post-graduation in Math, Economics and Sanskrit. In 1971, DAV became first College to introduce M.Sc. Chemistry. DAV was chosen by Indira Gandhi Open University, the very first college as study center for Punjab, Haryana and Himachal. The first Co-Educational to introduce M.Sc. in Physics; the first and only College which provides free of cost Sanskrit education till PG level. The only college in India, who won the accolade of Youth Parliament consecutively twice; first and only college and winner of Nehru Hockey Championship 12 times. In 2001, the first college manifested himself well for NAAC Recognition.

DAV College equally values the academic proficiency along with art and sports. Our main motto is continued refining in the direction of a disciplined environment along with highly qualified teachers, a large and well-stocked library, spacious laboratories and academic excellence. It is our endeavor that our students became curious, ambitious and reliable citizens. We encourage students to develop a scientific approach. We, improve their ability to identify their talents, focus on career choices, and further study and guidance, to train for research, as well as prospects for employment help. Many college students are finding placement in reputed companies in the last year.

Our college holds a lush green playground. Many of our students proficient in sports are serious, highly trained and very competitive. We are very proud of them. Our students have managed various art fields. They have brought a paradigm in Music, drama, painting, dance, film and photography. In addition to the annual cultural festival we strive for encouraging them through various competitions and workshops

We believe that the world is a better place and we have to make it great. Therefore, students who come to us, rather making them mere degree holders, our primary object is to make them socially responsible citizens and concerned towards humans, nature, the environment and wildlife. During college classes, NCC and NSS training, we are committed to the effort to make conscious and responsible and sensible students.

Principal Dr. B B Sharma again felicitated everyone and said that every personality who has cooperated in this entire sojourn of 98 years of this institute, they all are receptors of compliments! 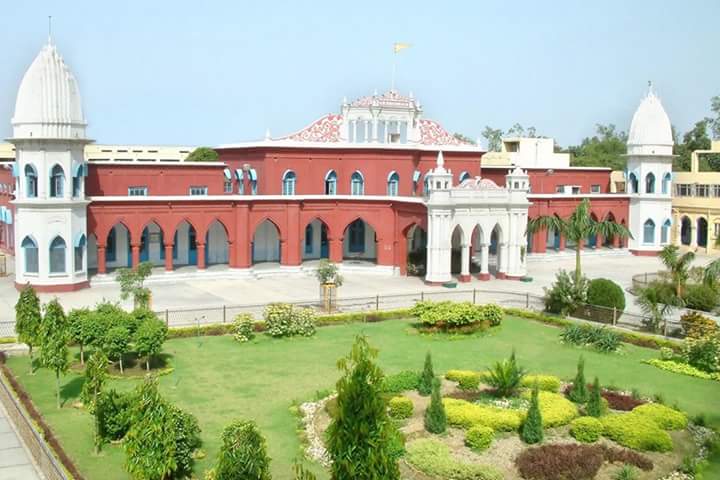 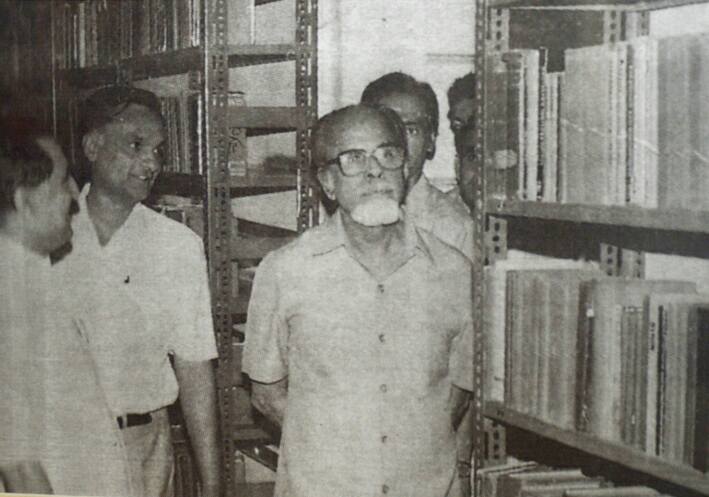 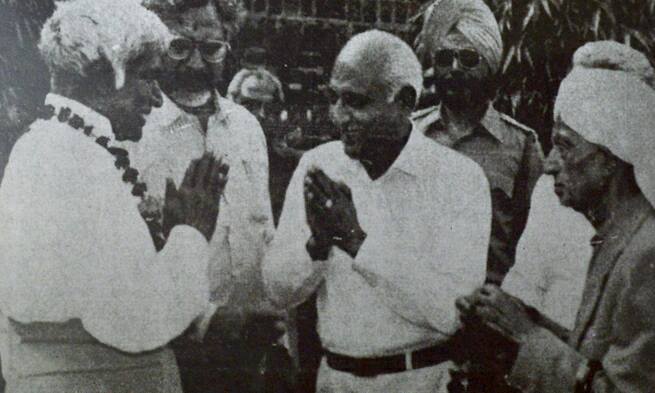 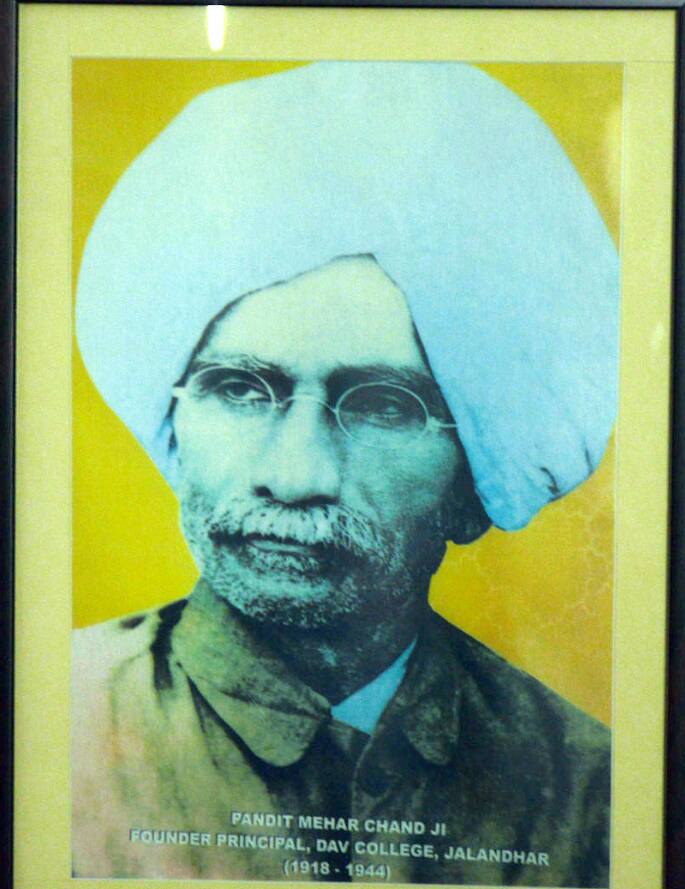 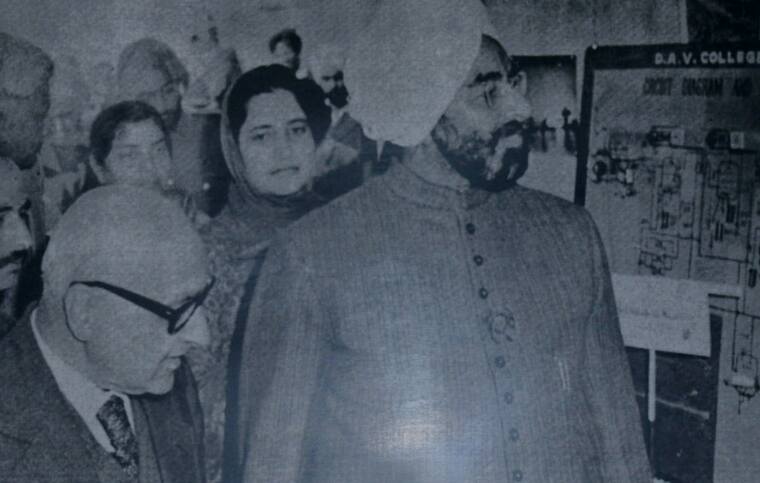 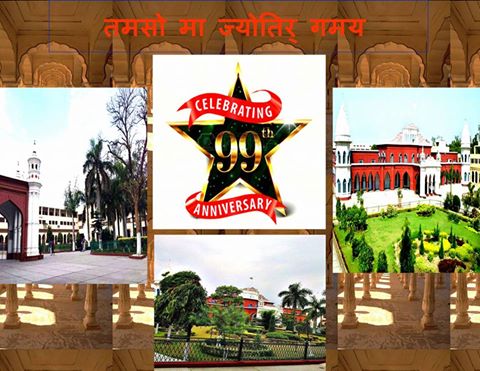 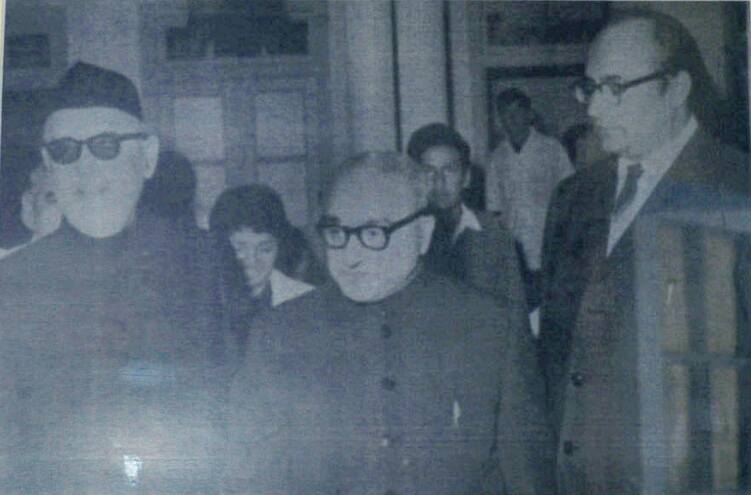 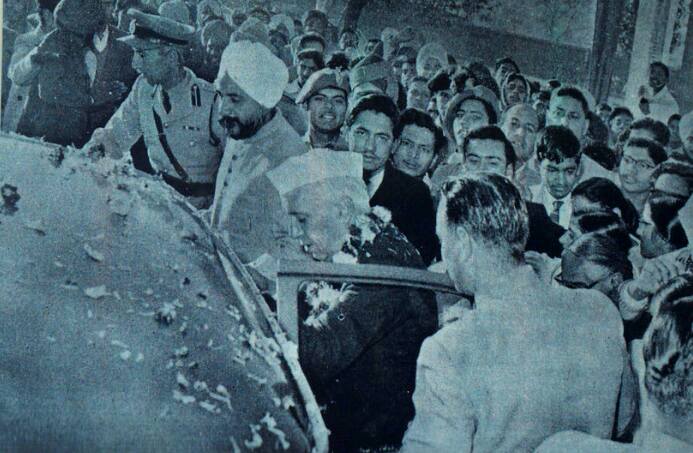 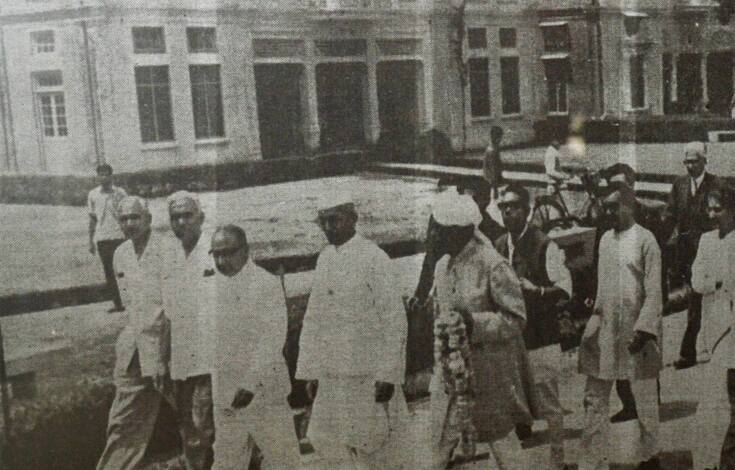 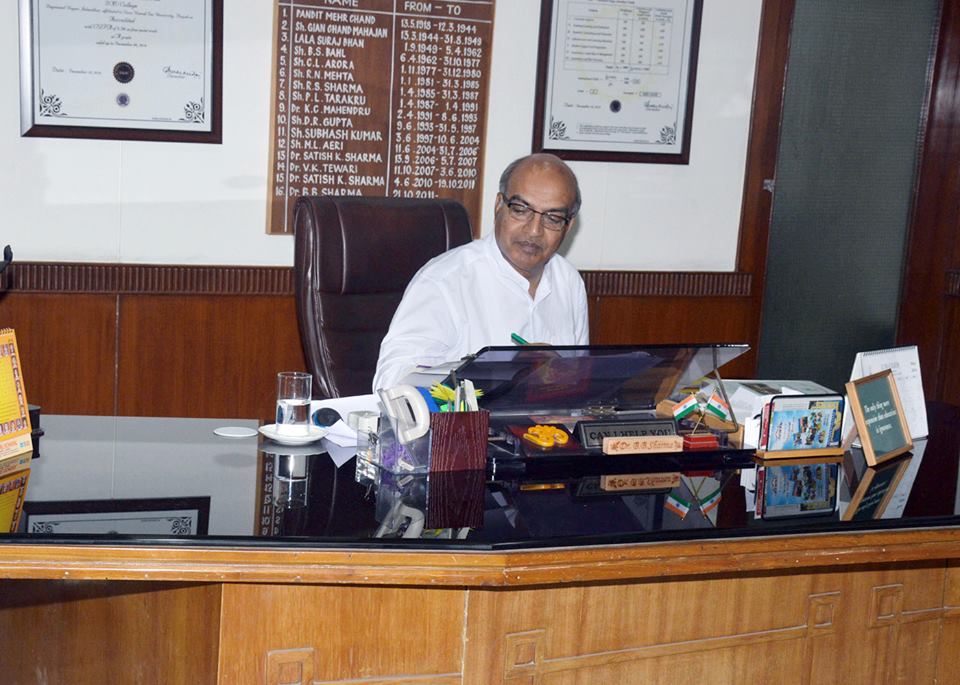 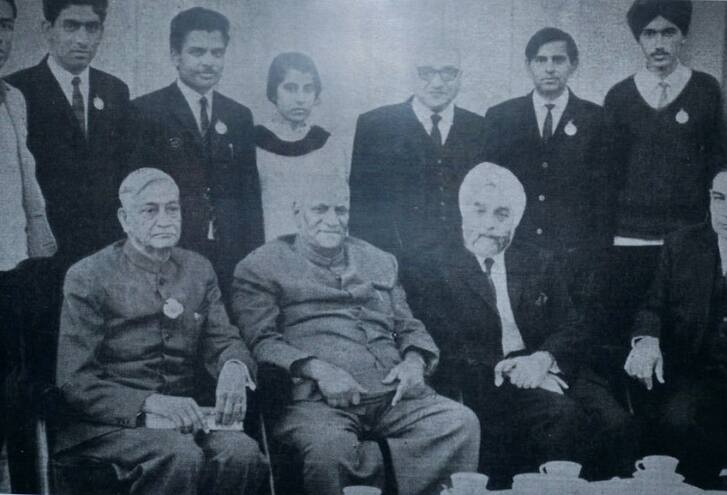