On the 2nd day of IDM Commerce Cricket League of Dav college jalandhar , the students maintained their classy rocking performance.

“Naveen created a record of 7 sixes in his innings”

The rocking start of IDM CCL season 6 continued even on the 2nd day of the tournament, with 6 matches being played on the grounds of Dav and DMS. Dr Sanjeev Sharma president commerce forum initiated the matches and quoted “all the players are playing in a disciplined manner and are upholding the spirit of sportsmanship “

Tournament in charge Prof Manish Khanna told that the Sunday matches will reveal which all teams will book a berth in the semi finals.

In order to get on the number 1 position in the score card , all the teams showed up great performances on the second day of the tournament.

First match was played between Dragons and Musketeers where musketeers gave a big target of 134 runs , which the dragons lost by just 2 runs in a very interesting match . Naveen was selected as man of the match for his all round performance (runs 74, wickets 2).

Second match was played between Rangers and Royals where rangers put up an easy target of 62 runs. Royals during their innings got all out at 58 runs and lost the match . Ishpreet for his tough innings was selected as man of the match (runs 10, wickets 2).

Third match was played between Hurricanes and Jaguars , where hurricanes in a one sided match beated the jaguars against a normal easy target of just 32 runs , which the hurricanes achieved in just 4 overs . Rahul for his awesome and diligent bowling (4 wickets) was selected as man of the match.

Forth match was played between Bravos and Demons , where demons in their innings put up a score of 104 runs , following which bravos got all out at just 51 runs . Ravjot for his all round performance (51 runs ,2 wickets) was awarded as man of the match.

Fifth match was played between Dragons and Royals where dragons posted a big score of 160 runs , following which The royals during their innings got all out at 64 runs . Shubham and Ankit from dragons scored 32 and 52 runs respectively , and Ankit was awarded as man of the match . Ankit got 1100 rupees as prize money from Mr Rakesh for his glorious performance.

The sixth match was played between Rangers and Musketeers , where rangers posted a score of 78 runs in 15 overs losing 7 wickets . The musketeers achieved this target in just 13.5 overs by scoring 79 runs and became first test to enter in the semi finals. Rahul Mahey (44 runs and 3 wickets) was awarded second time in the tournament as man of the match for his all rounder performance.

Under the guidance of Prof Naveen Sood,the umpires are performing very well and in an unbiased manner , and the players are playing with great zeal and enthusiasm. 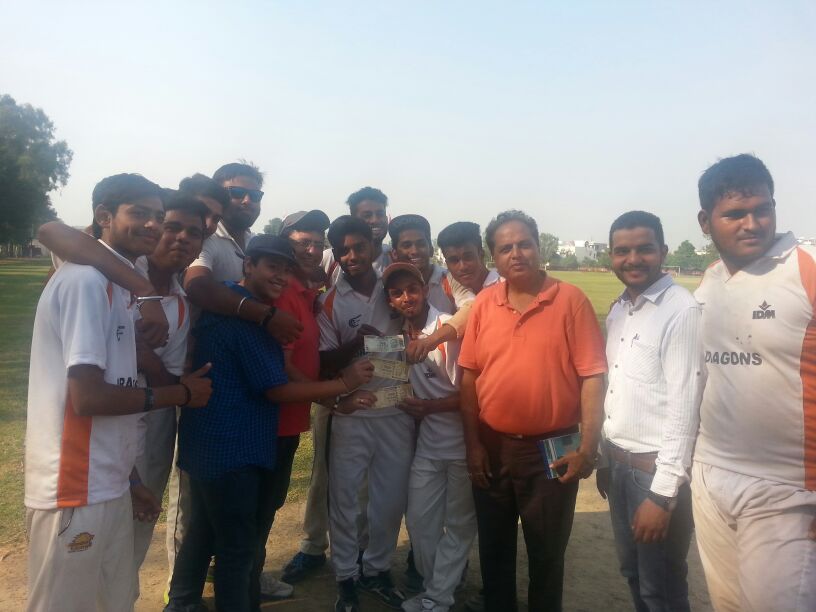