Youth is the future of the nation, and to carve out and frame positive leaders for the future, DAV college following the concept of “every student every chance ” formed a “Students Central Association”.

With a view to provide orderly equal representation to all the streams and classes , Dean student welfare cell,Prof Ashok Kapoor formulated The Students Central Association.

The association is formed by a total of 70 students out of 7000+ DAV strength , providing representation to top 1% students ,the cream of the college .
The students are selected on the basis of their academic excellence, their communication skills ,their dedication towards the instition and the personality they have been upholding in the instition .

The association had been working during the last academic work under the glorious stewardship of Dean students welfare Prof Ashok Kapoor during the NAAC accreditation where the college scored highest 3.76/4 CGPA and was ranked first in the best coeducational institution ,and the association with its exemplary contribution and dedication have presented an exemplary teamwork .

Principal Dr B B Sharma on the occasion again formulated the new batch of students representing the student central association , and talking about the leadership skills being exhibited by the dean student welfare Prof Ashok Kapoor, under whose leadership and excellent stewardship the association has been performing great even during the NAAC accreditation. Principal Dr BB Sharma addressed the students as future leaders and invited constructive suggestions from them for further improvement of the college in all aspects , where all the students put forth great suggestions, which the college would definitely incorporate in the near future.

Prof Kapoor further told from within the association a student quality cell would also be formed , a cell which would further be dedicated to work for the student welfare 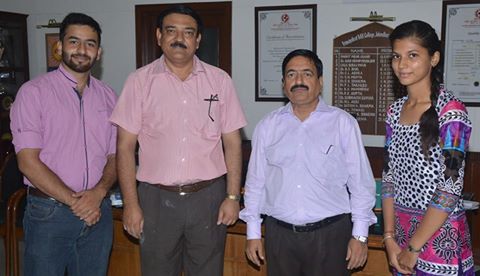