“NCC provides a future to the patriotic youth of the country ” said Lieutinant colonel Tejpal singh in induction program of Ncc wing of Dav College.

To educate and impart the true essence of NCC and to motivate The new students to join it DAV College organised an induction program for the new students . Liutenant Tejal singh was the chief guest , commanding officer 2 PB.BN NCC and they were given a floral welcome by major Sk Tuli and captain Samir Sharma.

Liutenant colonel TEJPAL singh quoted “NCC is a grand platform to make and build a career in armed forces” . Joining National cadet corps one can serve any 3 of the armed forces ie army navy and air force with your talent zeal and enthusiasm. NCC serves to provide a career to the disciplined and enthusiastic corps . Whether it is air force , navy or army the NCC cadets are admitted with an edge over others under a special quota reserved for them . NCC is termed as a collateral to the armed forces for their use during emergencies if any which may arise in the nation. Further Sir Tejpal quoted that they are imparted training as future leaders . During the recruitment process of armed forces the NCC certificates act as a great rank provider .Talking about the army , it reserves 64 ranks every year for the NCC cadets in the Indian Military Academy , who are admitted via UPSC and UASB entrances.

Major S K Tuli gave an influential power point presentation motivating the students to join NCC at the college platform. NCC certificates at school levels are only eligible till higher admissions but not helpful in building a career .In the initial year B certificate and in the second year C certificate is provided to the students pursuing NCC . If in the initial year the student has been a part of the NCC camp then they become eligible for the B certificate examination . This exam is organised by the NCC unit. And if they have been a part of the national integration camp , then they become eligible foe C certificate examination of 3 hours . Only the physically fit and motivated students are allowed to join NCC.

Captain Samir Sharma quoted ” NCC helps to build up the essentials of leadership , management and a responsible citizen of the country ” . In the present day scenario NCC is helping the youth in stress management , punctuality , character building and building effective communication skills. 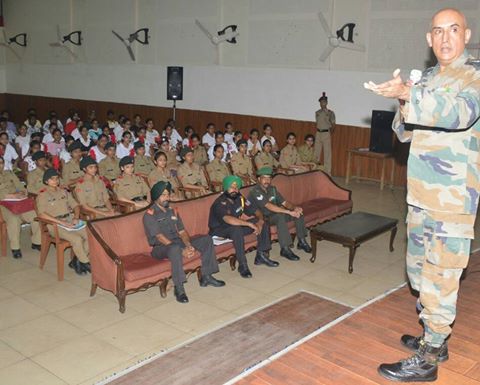 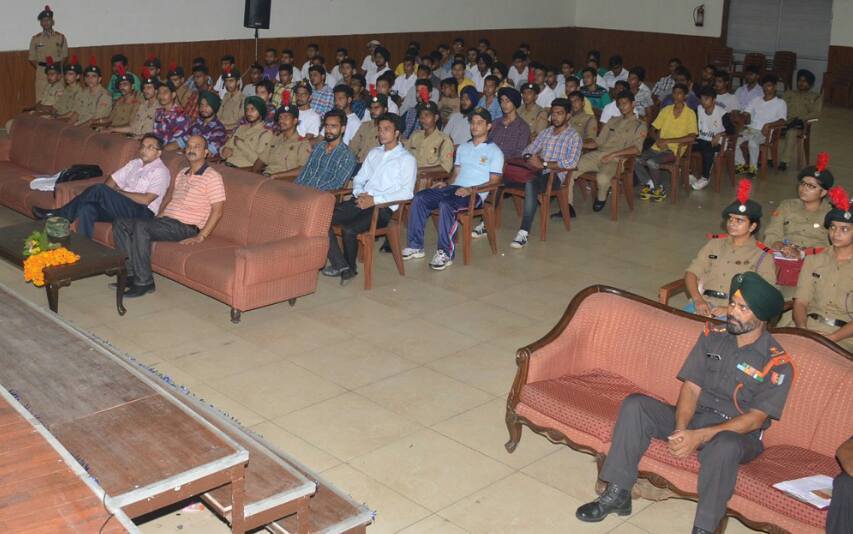