The chief speakers on the inaugural day were Prof. I. B.S. Passi, Professor Emeritus, IISER, Mohali  and  Prof. Dinesh Khurana, Panjab University Chandigarh. Prof. (Dr.) P. K. Sharma, the convenor of the workshop gave an initial introduction of the Advanced Training in Mathematics (ATM) Schools and the National Centre for Mathematics (NCM). This programme was an inspiration of the proposal of Prof. Ravi Kulkarni, President of Ramanujan Mathematical Society, as a part of RMS-UGTE which has been funded by ATM School. Dr. P.K. Sharma also welcomed the guests and the teachers who has come from different part of the country to attend this workshop. Principal Dr. B.B. Sharma who has been the guiding force behind this workshop also gave best wishes for the workshop. He also presented momentos to Prof. Passi and Prof. Khurana. Prof. Ajay Kumar Aggarwal, HOD Mathematics thanked all the guests and teachers and hoped that the workshop would be fruitful to the teachers attending it.

On the second day of the workshop, Dr. Harpreet Kaur from Guru Nanak Dev University was the main speaker. Her lecture was on rings. She began her lecture in a very lucid style by quoting many examples. Her way of presenting the things was also liked by all the participants. She explained every step involved in the proof in a very simple way. At the end of second day Asst. Prof. Miss Shelly Garg from D.A.V. University  took the tutorial lecture. Her method of solving problems was also appreciated by the participants. Prof. Ajay Kumar Aggarwal and Dr. P.K. Sharma gave a token of thanks to Dr. Harpreet Kaur and Miss Shelly.

On the third day also the speaker was Dr. Harpreet Kaur. She continued with her lecture on rings and explained many advanced results on the theory of rings followed by the tutorial taken by Miss Shelly in the evening.

On the fourth day of the workshop. Dr. Dinesh Khurana and Dr. Anjana Khurana both from Panjab University Chandigarh were the main speakers. Dr. Khurana gave his lecture on the factorization of the element in certain domain and discussed some interesting results on the gcd. and lcm. of two elements in certain domain. As before, his lecture was well planned and attracted the attention of the every participant. The last two lectures was delivered by Dr. Anjana Khurana. She spoke on the Euclidean domain and Principal ideal domain and gave certain examples of them and proved that Z[Öd] is Euclidean domain for certain values of d and PID for certain others values of d. At the end, participants asked many questions regarding the application of mathematics and in particular of algebra in day to day life.  Dr. Dinesh Khurana gave answers by quoting many examples that all the participants were very happy and gave a high volume of clapping to his answer. He then gave certain interesting results of Wedderburn result that:  Every finite division ring is a field followed by Jacobson and Herstein results on commutativity of a ring.

On the fifth day of the workshop. Prof. Ram Parkash Sharma, from H.P. University Shimla was the main speaker. He spoke on the main topic of the workshop. He introduced modules to the participant in a very simple way by citing many examples. His way of lecturing was also appreciated by the participants. To fill in the gaps between certain results on modules. and vector spaces. Dr. P.K. Sharma, convenor of this workshop gave a lecture on the topic Modules versus vector spaces. He showed that some results that hold in case of vector space were not true in case of modules. However certain pathologies in case of modules can be removed by taking a special type of ring like PID. After this Miss shelly continued with her tutorial lecture on rings and modules.

On the final day of the workshop, Prof. Gurmeet Kaur Bakshi from Panjab university Chandigarh was the main speaker. She spoke on the structure theorem of finitely generated modules over PID. She also discussed the Application of finitely generated abelian groups, Jordan and Rational Canonical forms with emphasis on computation.

At the end a Valedictory function was organized in which participants share their experiences in the workshop and thanks the organizers for giving them an opportunity to attend this workshop and also the best hospitality given to them during these days. Lastly the participants were given certificates on successful completion of their course. 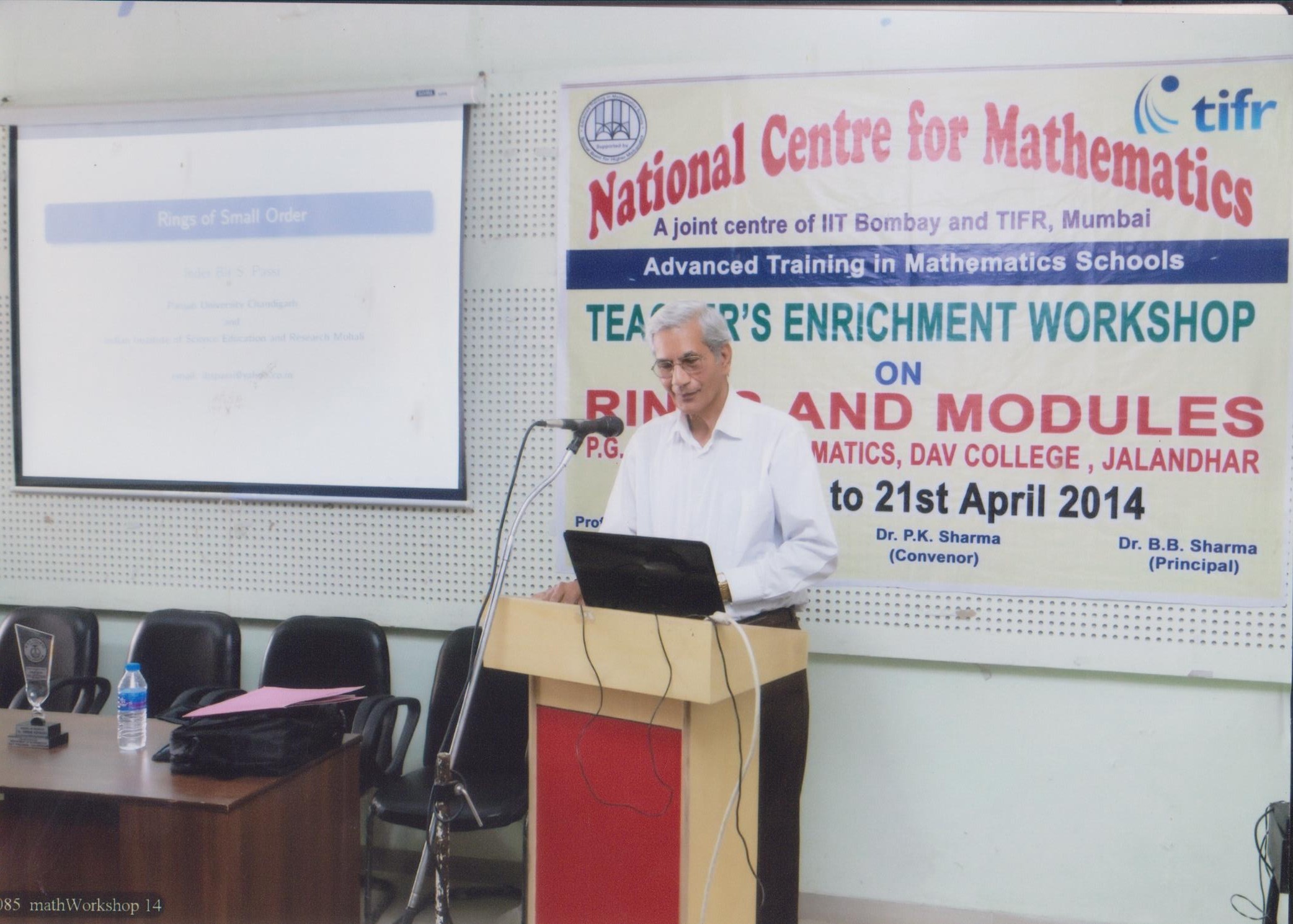 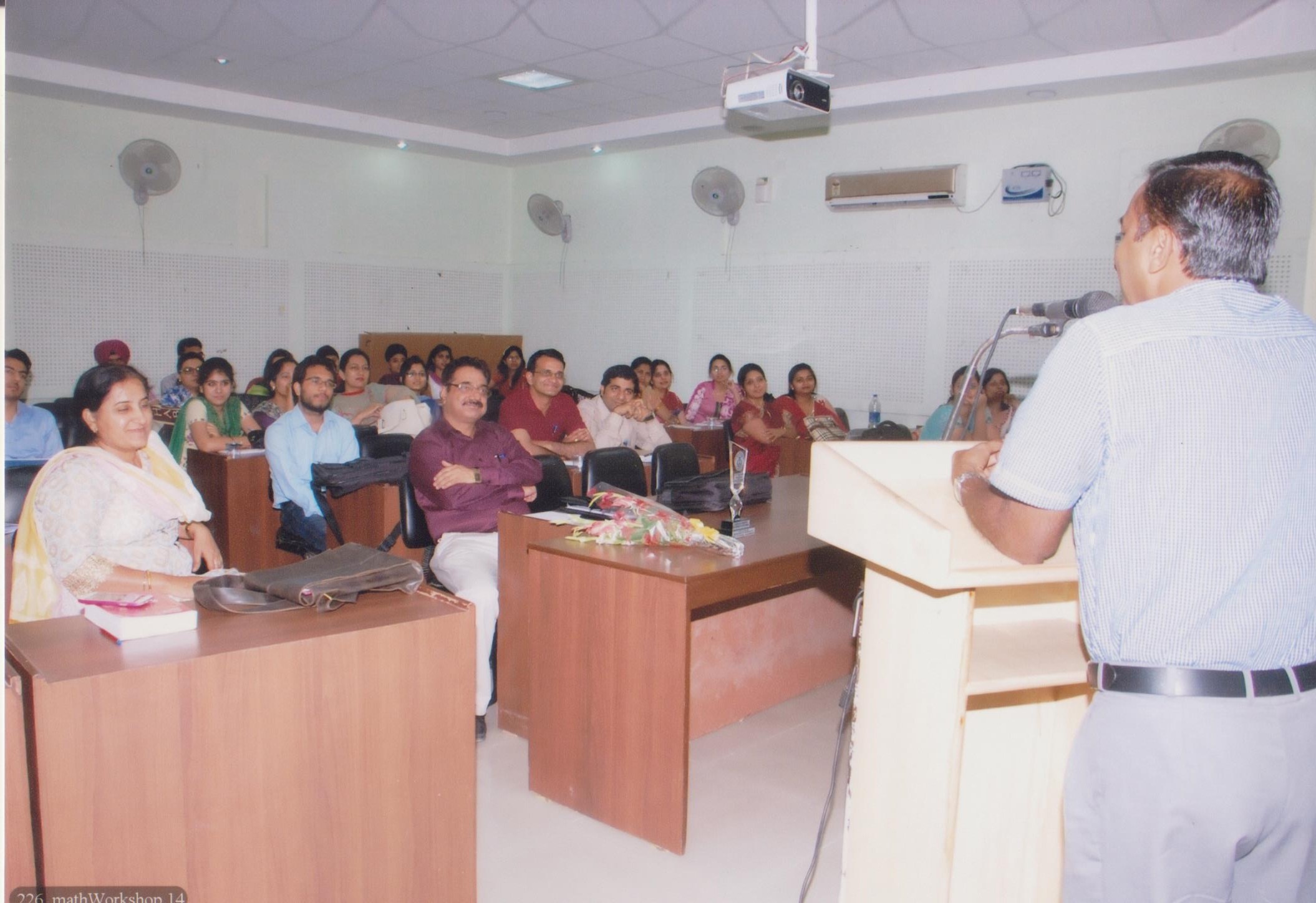